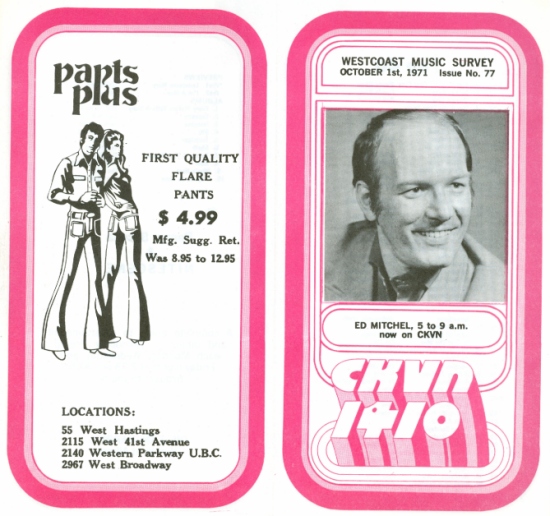 Hello there, faithful readers!  It’s time for another holiday, as we reflect and show our appreciation for the working men and women who made this country what it is by cooking steaks and burgers on a grill and drinking a bunch of beer.  Sounds perfect to me.  So crack open an ice cold one and let’s all enjoy a Top 10 flashback! END_OF_DOCUMENT_TOKEN_TO_BE_REPLACED

All right, loyal readers!  Settling back into my little weekly groove, got what passes for creative juices flowing again, and scouring the internet for old local chart data.  Doesn’t everybody do that?

So…where shall we go this week?  I’ll just throw a dart at the map…Louisville, Kentucky.  Sounds good.  Now we spin the wheel and it lands on…wait for it…1971.  All right, let’s do a Top 10 flashback! END_OF_DOCUMENT_TOKEN_TO_BE_REPLACED

Good (time of day you’re reading this), and welcome to Top 10 Flashback, the weekly feature that just won’t go away.

This week we will venture a mere 60 miles north of my hometown to the one city that, per capita, is more dangerous than Detroit.  Yes, I’m talking about Flint, MI, former GM manufacturing hub and hometown of Michael Moore.  This once-proud city is now a complete fucking wasteland – Moore did get it right with “Roger & Me,” and it’s only gotten worse since that film was made nearly 25 years ago.  At least Detroit has some places people might actually want to go, but nobody ever says “Hey, let’s go hang out in Flint.”  Unless they want to get shot or something.

END_OF_DOCUMENT_TOKEN_TO_BE_REPLACED

So, how the hell are you?  Not bad here.  Got the Crown Vic running great now, so I can drive it around while I tend to a few things the Jeep needs.  Then there’s still the matter of my mostly-finished kitchen.  What the hell’s wrong with me?  If biting off more than you can chew isn’t your style, you can just nibble on a Top 10 flashback!